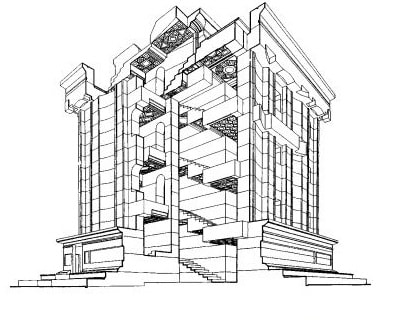 Baalbek cutaway perspective reconstruction of the Great Alter.
Stereotomy is the art and science of cutting three-dimensional solids into shapes. Typically this involves materials such as stone or wood, cut and assembled into composite structures.In the example at Baalbek, each stone has been designed sculpturally to create a unique vector. A component block of the alters might be comprised of dozens of curved and planar surfaces defining both figures and voids and cut to a perfectly conceived analytical plane, their multi-planar faces commingling as snugly as organs in an anatomical model. 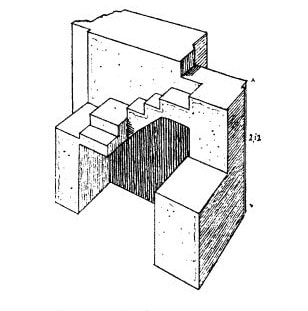 Baalbek, A single block from the great alter
The whole structure of the temple was made, with great skill, laid together so very harmoniously and smoothly, that there appears to be no sign of any hammer, or other instrument of architecture, but as if, without any use of them, the entire materials had naturally united themselves together. 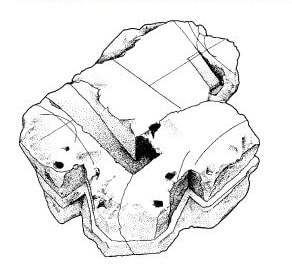 Baalbek, fragmentary stone.
Baalbek, fragmentary stone.
​
The structures have been resilient to the most cataclysmic, tectonic movements throughout history. It has been said that not even a sheet of paper can be passed between them. Held in place not by mortar but by their own uniquely cut forms which work together as a composite whole, to form something greater than themselves.